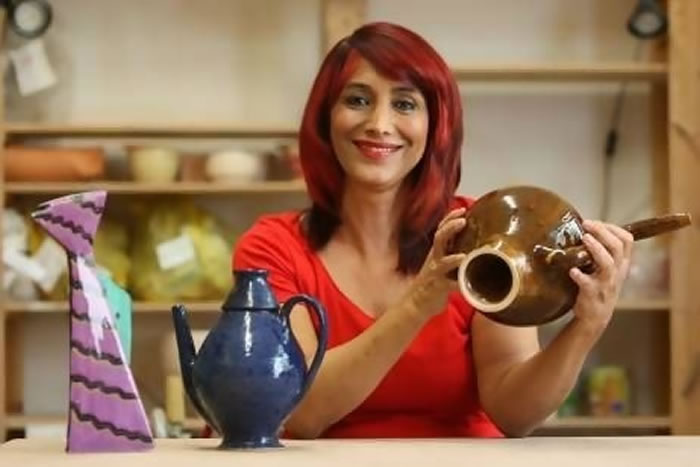 The UAE potter Homa Vafaie-Farley has become one of the first contemporary artists to have their work displayed in the National Museum of Iran. Hugo Berger explains how she achieved this rare honour

The National Museum of Iran in Tehran is home to room after room of priceless and historically significant artefacts.

But when Homa Vafaie-Farley visited the institution a decade ago, one particular piece, a 4,000-year-old ceramic pot, captured her attention.

“It was just such a beautiful piece of craftsmanship,” remembers Vafaie-Farley, who owns the Abu Dhabi Pottery gallery and workshop in Khalidiya.

“The fact it was so old and so well designed really inspired me to want to know more,” she says.

Because of her fascination with the pot as well as her Iranian origins, she chose this ancient vessel as the subject for her thesis when she was studying for a degree in ceramic design at the Glasgow School of Art in Scotland in 2008.

Considering the age of the piece, it has an incredibly sophisticated design. It consists of outer and inner layers with a hole in one end that you use to fill with liquids. It can then be turned upside down to pour fluids from a spout at the other end. Yet experts were confounded as to exactly how it was constructed and what it was used for.

So, as part of Vafaie-Farley’s course, she set about deciphering its mysteries.

“They guessed it was made for making medicine or for distilling liquids but no one really knew.”

Her first step was to write to the museum requesting a chance to examine the pot in person, which she was granted permission to do.

“The day I went there, there were 16 officials standing around,” she says. “They had to undo the seal on the cabinet and sign all these papers. Then they just gave the pot to me and I stood there with this pot with no table or anything. Of course, I was terrified that I would drop it, so I said: ‘Please give me a table to put it on.’

“But it was a fantastic experience, as I was able to measure it and check out all the dimensions. I found out every little detail about the pot.”

Upon returning home to Dubai, with the help of her engineer husband Michael, she created her own version of the piece. She then returned to Iran to show the museum curators her handiwork.

They were so impressed that they asked her to create one more version of the ancient pot but this time with a panel cut-out of the outer layer to show its inner workings. Vafaie-Farley was happy to comply.

“They said they would keep my cutaway pot to show to students and others,” she says. “But they said they wouldn’t put it in the museum itself because they only have ancient pots. They never show contemporary art there.”

This year, however, the museum made an exception for Vafaie-Farley’s pot. In August, officials from more than 150 countries attended the Non-Aligned Movement summit in Tehran. To mark the occasion, the museum hosted a special exhibition to impress visiting dignitaries with the richness of Persian culture and the sophisticated technology of its bygone civilisations.

In one case they displayed an exhibit detailing the Cyrus Cylinder, a 2,500-year-old clay artefact inscribed in cuneiform text that extols the feats of the Persian king Cyrus the Great. Next to this, Vafaie-Farley’s cutaway pot was put on show.

She says she was astounded when she found out about this development.

“They didn’t even tell me they had put it there. I’m in contact with the curators at the museum, so speak to them fairly regularly. So, when I called them they said: ‘By the way, your pot is in one of our windows.’ Afterwards, I said to my husband: ‘I must have heard them wrongly,'” she says.

“It is amazing for me. You know, every potter in Iran’s biggest dream is having a pot at the National Museum but they will not put any contemporary art on display exhibitions there.”

Then, last month, she visited the museum in person to see her work on display.

“When I walked into the room, I didn’t notice it and walked right by it. But then one of the guides pointed it out to me and I was so happy to see it there,” she says.

“Of course, they haven’t put my name on it but I have heard if you ask the guides, they will tell you who made it.”

Her work has also attracted interest from other academics. Recently, Dr Maziar Ashrafian Bonab, a forensic geneticist from Portsmouth University in the UK, contacted her because he believes her pot could reveal new insights about ancient farming practices in the Iran region.

But Vafaie-Farley says she is content to have helped advance historical understanding.

“My studies have helped me feel a connection to these ancient people who made this pot,” she says. “The first time I saw the pot I asked the curator: ‘Who would make something like this?’ and she replied to me: ‘Somebody just like you.'”

NB. Classes are held for adults and children, every day except Saturday and private sector holidays From 10:30 am last class at 7 pm