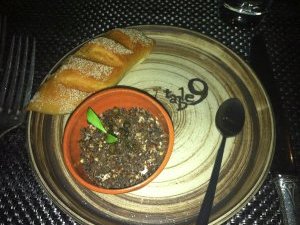 We say farewell to Gordon Ramsay, the man who started it all

Gordon Ramsay was the first celebrity chef to see Dubai’s potential and now, it seems, he’ll be the first to leave. October 28 will herald the last service at Verre by Gordon Ramsay, the British firebrand chef’s first venture outside of the UK and one that gave Dubai a taste for fine dining and Michelin-star names.

Since it opened 10 years ago, Verre has been a Petri dish of development for some of the UK’s most established chefs. Angela Hartnett and Jason Atherton worked at Verre before going on to the UK: Angela is Chef Patron for the acclaimed Murano in London and Jason Atherton is now running his own restaurant, Pollen Street Social, in Mayfair, London. More recently, the collaborations of Brits Scott Price, 30, and Nick Alvis, 32, have breathed fresh life into Verre.

So it’s with great relief that we can report that the two chefs who have worked tirelessly to ensure that the restaurant stayed in the collective consciousness of local foodies (in spite of the DIFC’s emergence as the new culinary focal point) aren’t following the trail laid by Hartnett and Co, but are staying at The Hilton Dubai Creek to re-launch Verre as Table 9, their very own venture.

Scott and Nick first heard rumours of Ramsay’s contract ending with Hilton six months ago, rumours they admit were unsettling, especially after a successful year. ‘We didn’t really know what to do. We were thinking: “What next?” We didn’t know whether Gordon was going to keep the contract,’ says Scott. ‘The hotel manager and the Hilton have been really supportive, and it came down to them saying: “We think you’re up to the job, so why don’t you go and do it?”’

In many ways, coming to Dubai under the Ramsay banner was a new start for Scott and Nick. Both chefs can’t praise their mentor enough, insisting that he’s always encouraged the evolution of their own cooking styles and personalities in the kitchen. However, when Hilton offered them the chance to have their names above the door of their own space, they didn’t have to think twice about it.

‘We’ve always wanted to start our own place,’ says Scott. These dreams become reality on November 9 (‘See what we did there?’ quips Nick, referring to Table 9’s auspicious opening date), with Verre’s last service on October 28. But, in only an 11-day interim, there’s plenty of work to be done.

It seems that the foremost change will be the restaurant’s ambience. Scott and Nick have cut their teeth in some of the UK’s finest dining establishments, and both are keen to relax the atmosphere, to make Table 9 more accessible to everybody – a place, they say, that you can go for a romantic dinner or simply a drink and a couple of dishes. The relaxed attitude will be reflected in the venue’s aesthetics. Providing everything goes to plan, Table 9 will have a very different look to the gleaming, mirrored surfaces and hard lines of Verre.

Artwork will be provided by local gallery Mojo and the fine chinaware will be replaced with pieces from local pottery artist Homa Farley: ‘We want something with our signature and something unique to Dubai,’ says Scott. When asked whether the grey carpeting dotted with dubious geometric designs will be replaced, Nick looks a little crestfallen: ‘For now, no – we haven’t got the budget for that.’ But, as he points out, the Dorchester manages to get away with dodgy carpeting, so there’s no reason Table 9 shouldn’t. Fair enough.

While Verre’s shiny decor will give way to a more down-to-earth aesthetic and its churchlike hush (in awe of potty-mouthed prophet Ramsay?) will be enlivened with a relaxed attitude, Scott and Nick assure us that the quality of the food will remain.

‘At the moment [at Verre] we do the set menus at Dhs395 and Dhs495,’ says Scott. ‘But this limits what we can do and limits the guests. So we’re going to do more of a tasting menu.’ For the main menu, there will be a selection of smaller and larger dishes, all individually priced, befitting of the new laidback ambience of Table 9. Nick gives a few examples of the dishes we can expect to see – for starters, there’s a mosaic of red- label chicken and foie gras served with prunes and salted hazelnuts. ‘There are 27 new dishes. We’re also doing our own bresaola,’ adds Nick. ‘That’s an interesting process – marinating [the beef] for three days and drying it for a further nine days. ’

As with many aspects of opening a new restaurant, nothing is as simple as it seems – even fine-tuning the menu has been a learning curve: ‘We want to have scallops on the menu, but the minimum order from Norway is 10 kilograms, so to test one scallop we have to order 10 kilograms,’ says Scott.

‘What we’re doing differently is sticking to three or four ingredients on a plate,’ adds Nick. ‘So we’ve got a nice, spanking-fresh scallop from Norway, which we’re doing with onion and thyme. We’re braising the little pearl onions in hop, so you get that bitterness, which goes with the sweetness of the scallop.’

Since they’ve no longer got their mentor’s name above the door, it’s the ‘doing stuff they’ve not done before’ that Scott and Nick hope will fill seats at Table 9. Flying the Ramsay nest is a big leap for the young chefs, but they’re banking on the fact that Dubai’s dining scene has reached a new level of maturity – guests are no longer lured simply by celebrity names, but by quality food, service and creativity.

With the exception of Okku, there are few fine-dining restaurants Dubai can call its own – something that disappoints Scott as much as the rest of us: ‘There are no chefs making a name for themselves here. At the moment, when you get to a restaurant you know what you’re going to get before you even walk in. Dubai needs to move to the next level.’

Whether the restaurant fails or succeeds, it’s the first instance of Dubai-based talent choosing their adopted city to make a name for themselves, rather than returning to Europe to do so. And while Scott and Nick’s move is a bold one, their ambitions remain as down-to-earth as they are. When asked what they want Table 9 to be a year from now, their answer is simple: ‘Busy.’
Table 9 opens at Hilton Dubai Creek, Deira, on November 9. Reservations can be made by calling 04 227 1111

Post Views: 594
NB. Classes are held for adults and children, every day except Saturday and private sector holidays From 10:30 am last class at 7 pm